Timing is everything, especially for alewives! A visit to Quantabacook Lake and the “Quantabacook Dam Open House” on Saturday, May 18th was good timing to learn about an interesting fish ladder design, applicable to our marsh.

George River Trout Unlimited (GRTU) and the landowner of the Quantabacook Dam invited the public to celebrate the return of the alewives to their historic spawning grounds in Quantabacook Lake on Saturday, May 18, 2019.  The dam is also the site of Searsmont’s local conservation project between the land owner, GRTU, the Maine Department of Marine Resources, and the U.S. Fish and Wildlife.  Presently, when water levels drop, particularly in the late summer or fall, alewives in the lake cannot migrate back downstream.  Working together, they hope to collect data to help direct future efforts. 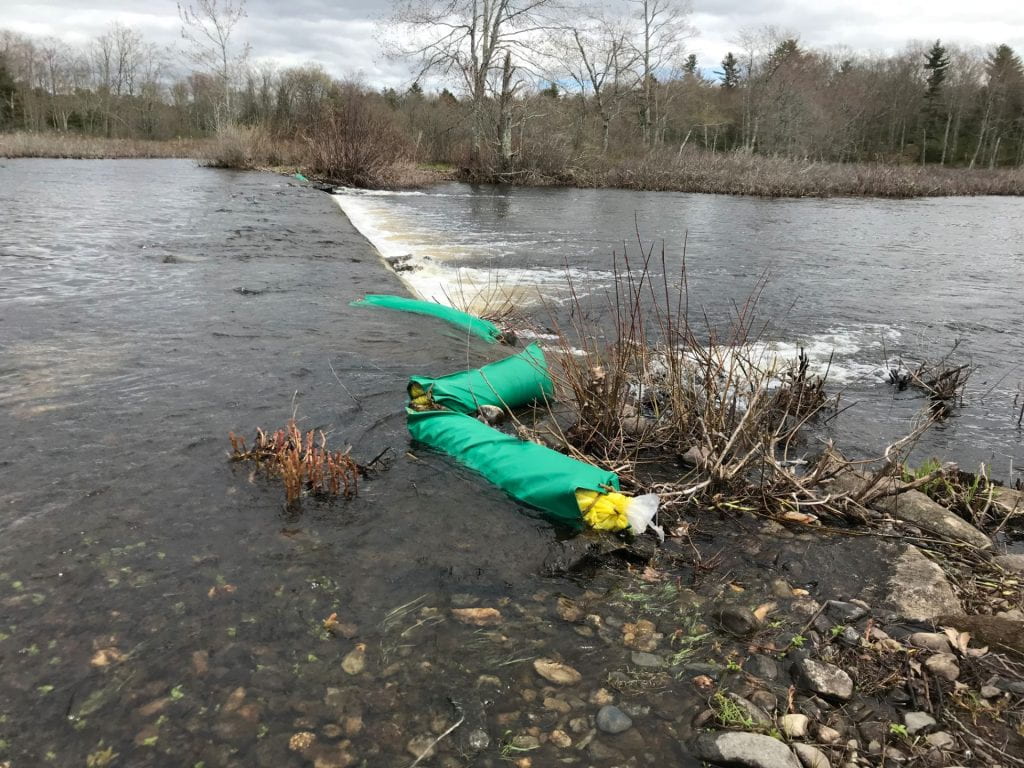 For now, helping the fish get in to the lake in the spring is aided with this fishway technique. It works well on this site when the water is high.  Although the run has been very slow this year with all the cool weather and rain, the landowner showed photos from last year with the 30-40′ section of river downstream from the dam teeming with the fins of alewives, pooling and waiting to negotiate their passage over the dam and into the lake. This day, which was not quite warm but not cold either, a few alewives scooted through the “gullies” at either end of the lake.  (Click on the link in the caption to see several alewives navigate the gully.)

During the open house, Marty Bartlett who has been designing the gullies and the fish ladders for low water conditions at Quantabacook Lake explained his floating fish ladder.  It’s a narrow trough that channels several inches of water, which will be enough to allow the fish to swim their flow.  The front edge attaches to the dam and a metal strap from each front, bottom edge will be pinned into the gravel on the other side of the dam. To get even more water flowing through the channel, a rubber strip extends the height on the edges of the front half. They self-adjust their angle as the water level in the stream fluctuates.  Locals also manage the water level in the lake as it exits during the alewife, by putting in “restraining” boards, and put those in place leaving only a 20″ gap in the middle of the dam where the fish ladder attaches.  The two “sluices” in the picture below actually are bolted together to handle the numbers of fish that are returning into the lake. 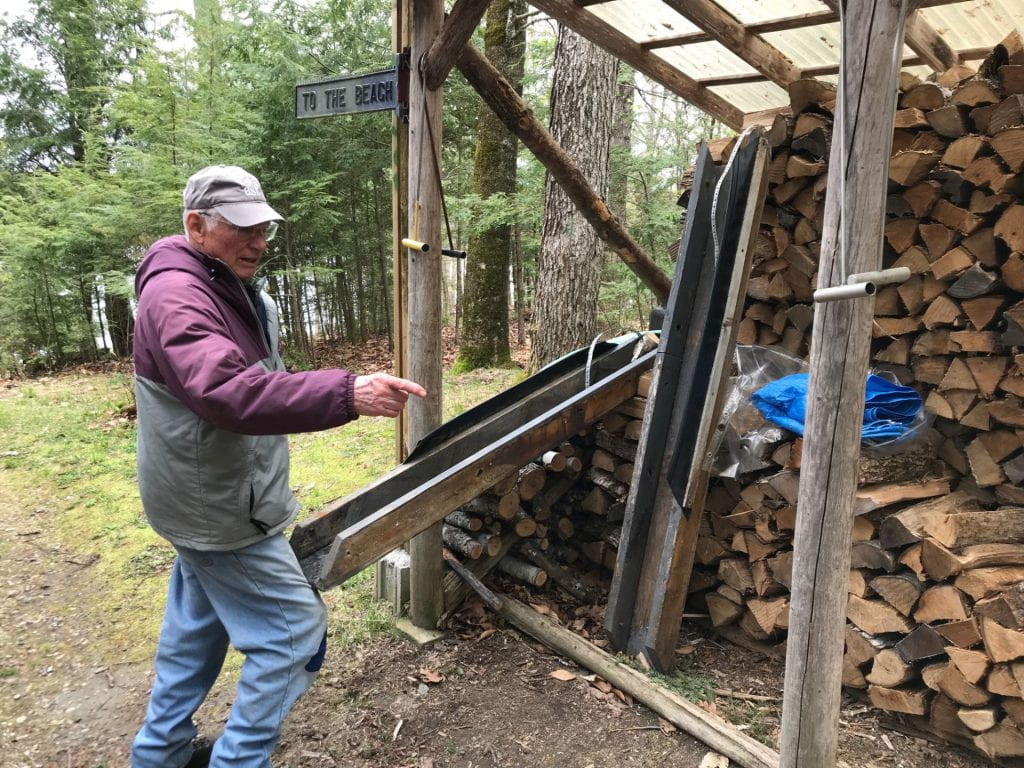 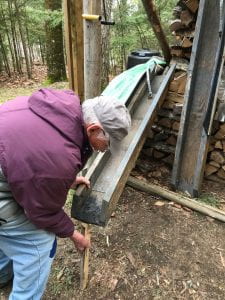 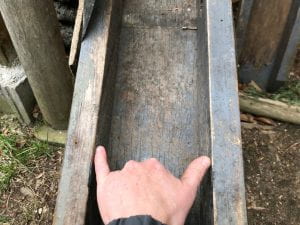 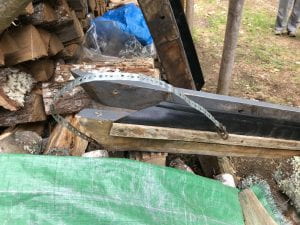 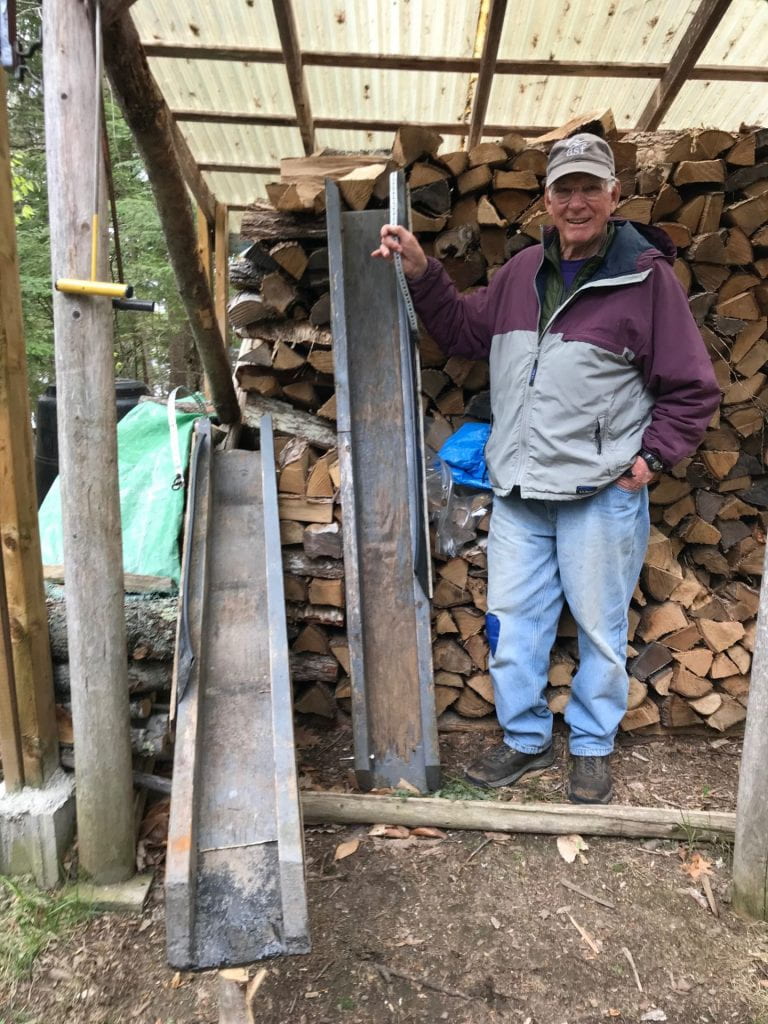 This dam at Quantabacook has a long history as do many of our dams.  It was originally built in the late 1790’s so the river between the dam and the village of Searsmont would flood and create a bog that could be used to grow cranberries.  In the late 1960’s the dam at the outlet was replaced.

The story of why alewives are even arriving at Quantabacook a tale of another dam: Sennebec Lake dam.  While the Sennebec Dam was being built on the St. George River in Union in 1916, observers noted large schools of salmon milling about at the base of the dam.  These salmon as well as the shad, alewives and eels were blocked from migrating to their spawning habitats; the ponds and lakes upstream. The dam was originally constructed to produce electricity and was later sold to the Sennebec Pond Association in the 1960’s, who used it only to maintain lake levels.

In 2002, The 12 foot high, 200 foot wide dam and replaced with a rock ramp fishway at the pond’s natural outlet.   This opened up another 17 upstream miles of the St. George River as well as 1100 acres of lake habitat in the Sennebec Pond and Quantabacook Lake for migrating fish.  It was far too late for the salmon to make a comeback, the alewives are back in Quantabacook, and the Searsmont community is celebrating!