We invited Ben to come to our classroom to help us interpret the survey data students helped collect back in October.  The data had been processed by Ben and he was able to show us visually in a 3-D view just what the contours of the stream bed looked like.  We made measurements from the printed contour map and determined the elevation changes and distance between each of the survey points.  This allowed us to create a longitudinal cross-section graph of the stream bed.  We found out that although the straight line length of the stream is about 75 feet, the water course is more than 100 feet with several twists, and the drop in elevation between the outlet of the marsh and the bottom of the upstream end of the culvert is just over 3 feet. 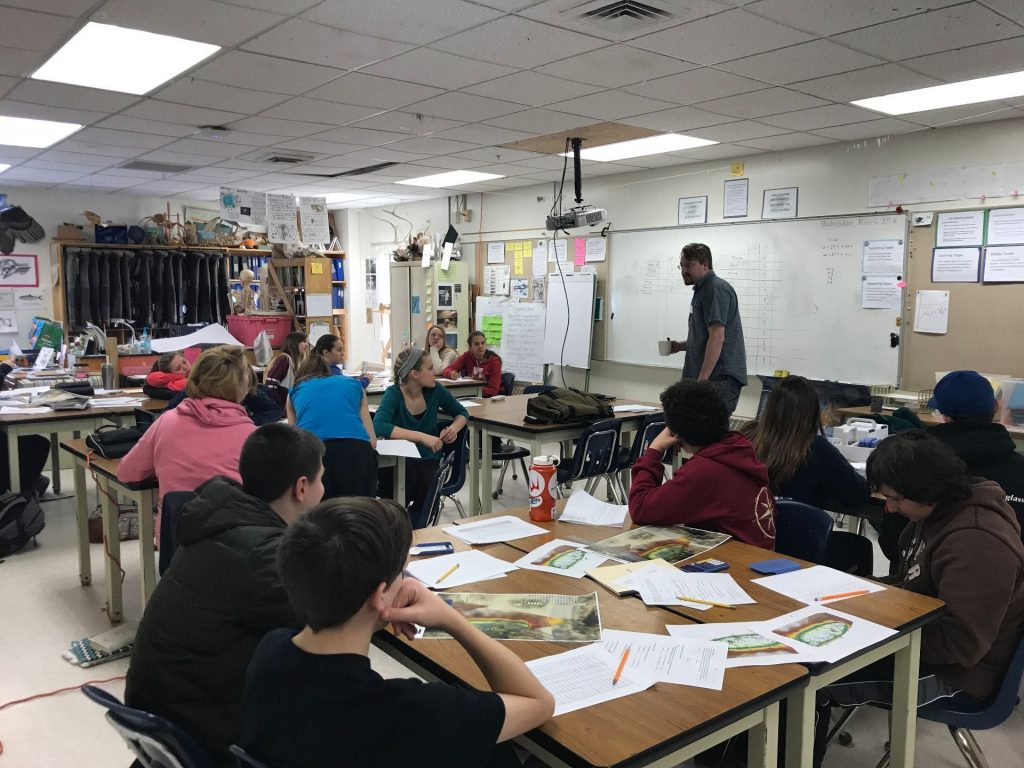 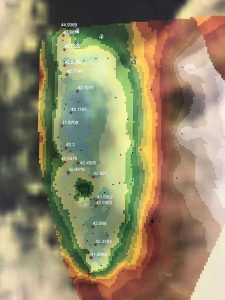 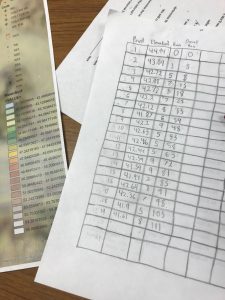 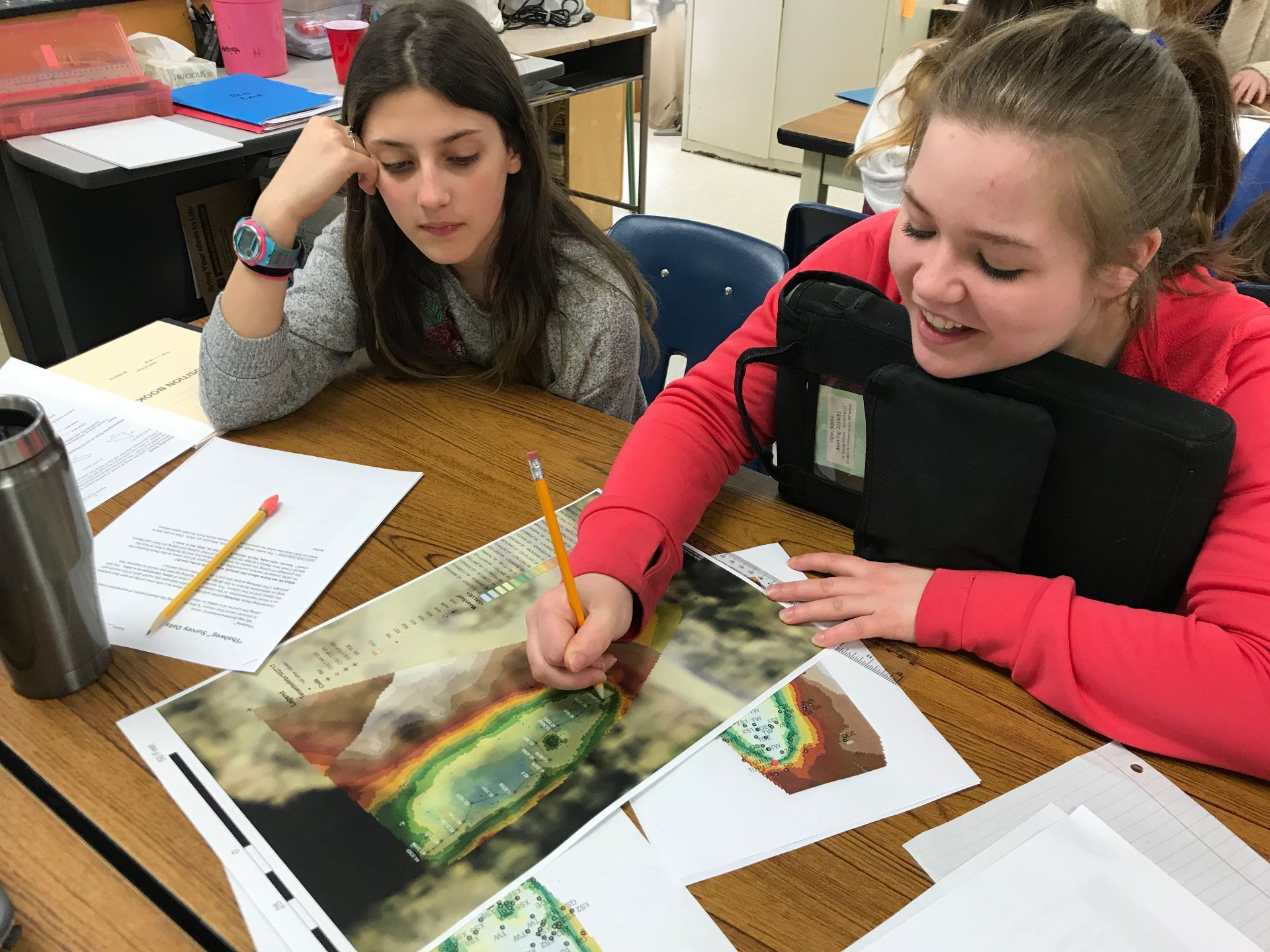 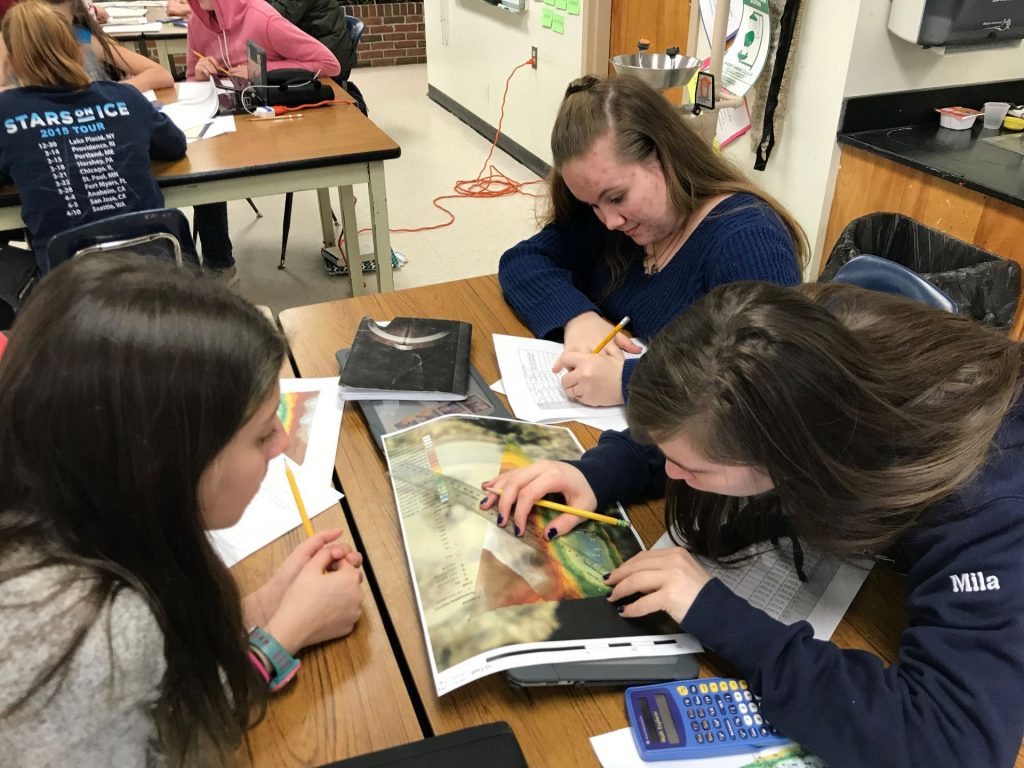 Our first task after a snowy March is to get familiar with the physical habitat of the stream.  Students were tasked with a site description that included an illustration as well as text.  Basic physical features like overall length and width, where there were pools and riffles, where natural features like boulder piles and pilings were located, what was the bottom structure were to be indicated and described. 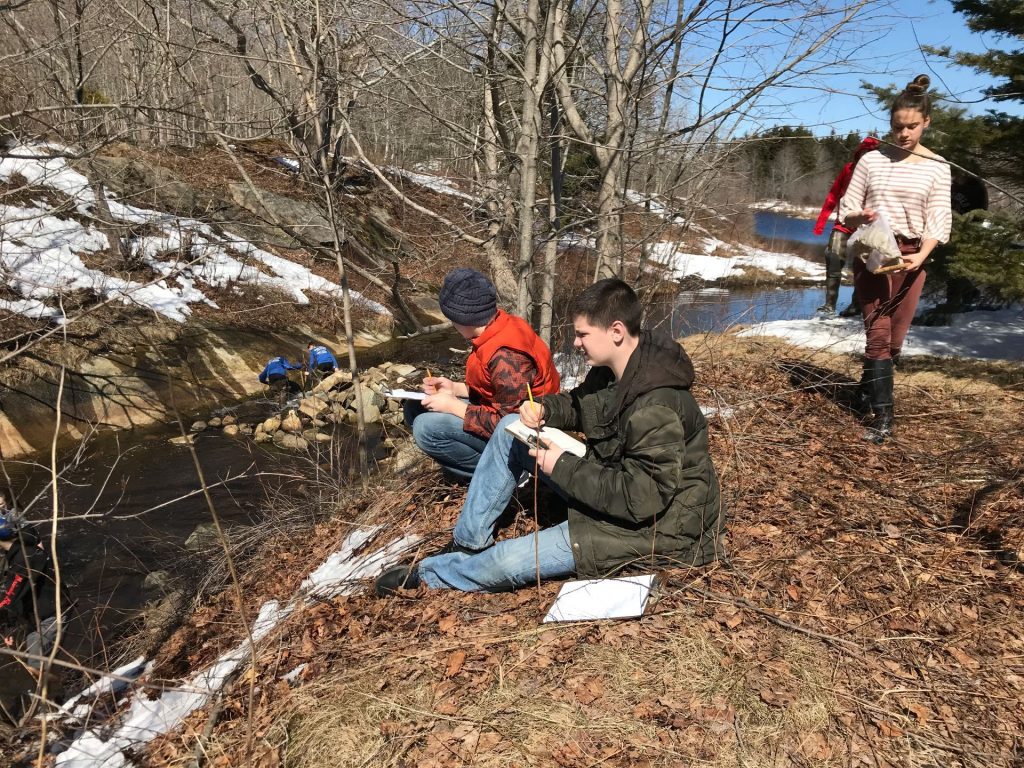 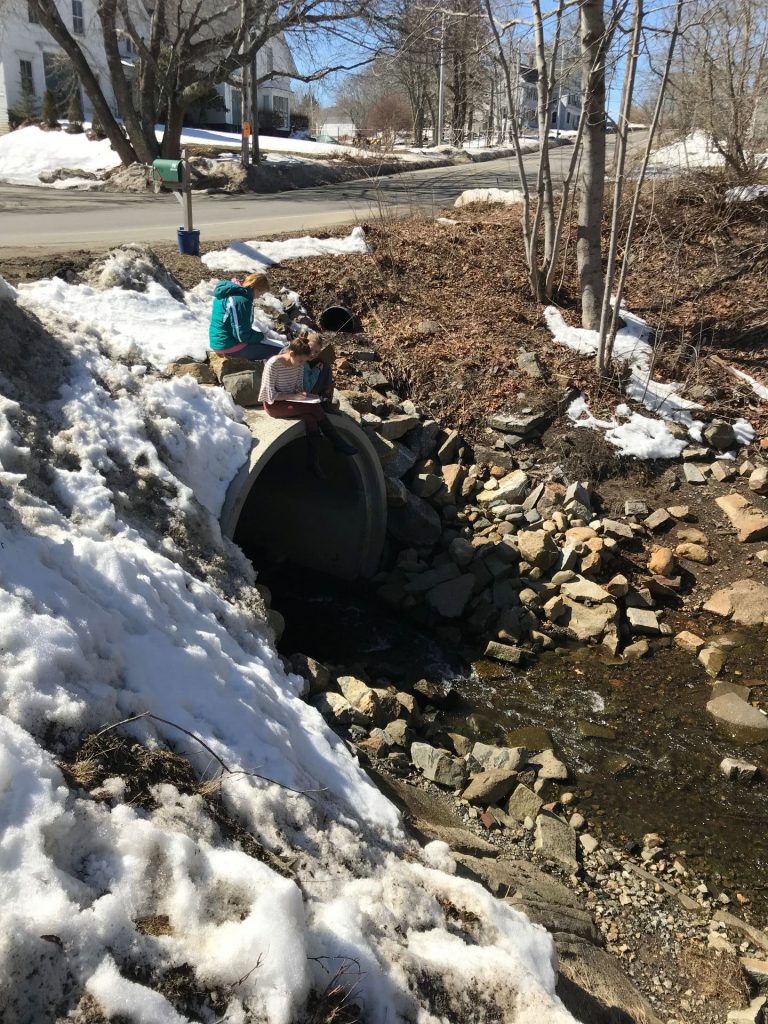 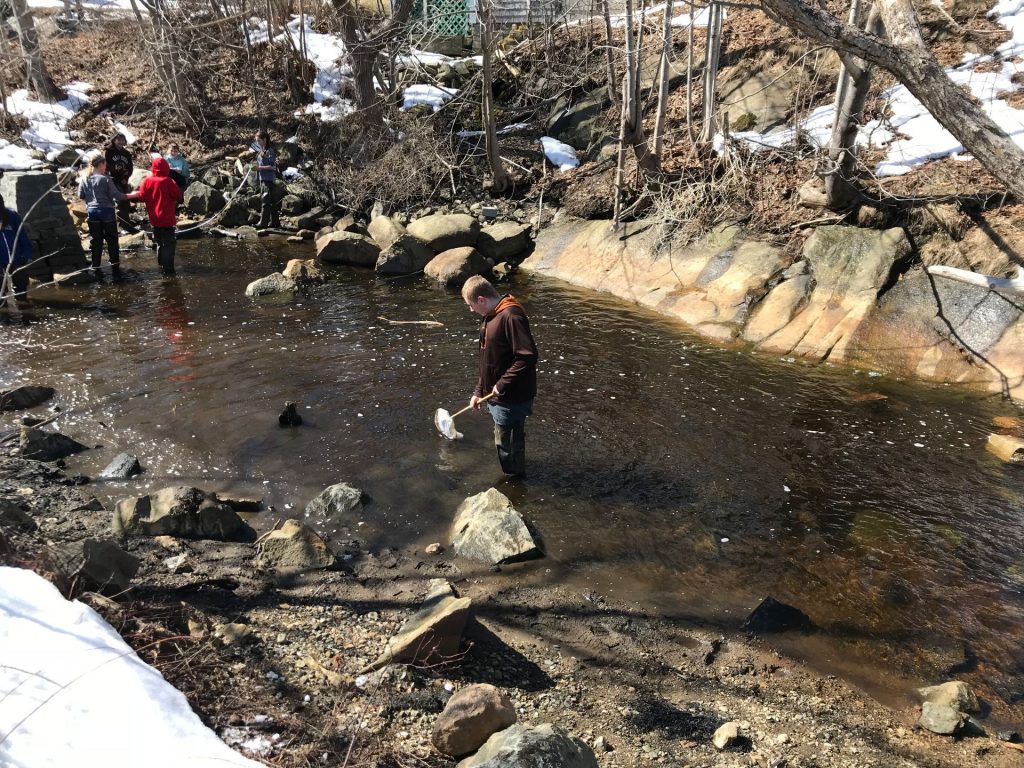 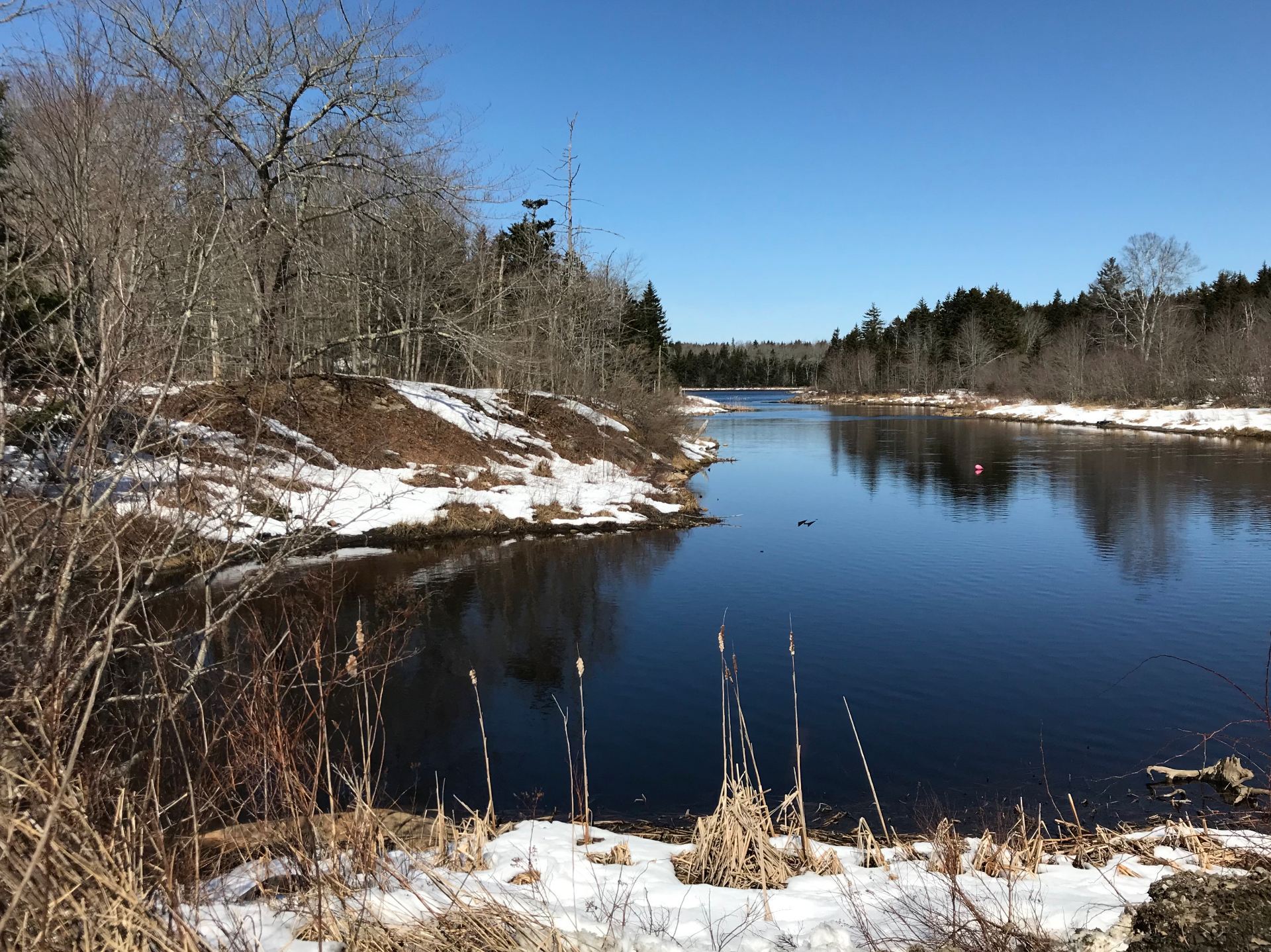 Mr. Josh Miller visited class on March 21st to talk to us about the joint study by the Tenants Harbor Fishermen’s Co-op, the Port Clyde Fishermen’s Co-op and The Nature Conservancy to determine the feasibility of fishing frozen alewives as lobster bait throughout the summer. 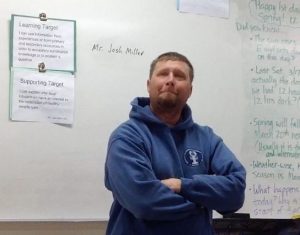 The study is intended to answer the following questions:

Are there alewives that are available for harvest that are not being used? (How many?)

Would alewives fish with similar success as traditional bait?

Would the cost of using frozen alewives as bait be comparable to traditional bait costs?

The fish are available because the alewife run is now plentiful enough that there are times when there are more fish available to harvest than the demand from individual lobstermen that use alewives as fresh bait (not frozen).  (All harvesting stations have to let some fish go through upriver to spawn in order to have the next generation of fish to keep the population healthy.)

In this study, alewives were fished starting in mid-late July by seven lobstermen.  Each person had about 30 bushels that they used to fish for new shell lobsters. Pairs of traps were baited; herring in one, and alewives in the other.  Another method was to alternate the bait in pairs of traps; the first pair would both get herring, and the next trap pair would get alewives. The idea was to have traps “mirror” each other. A logbook of which traps had which bait was kept, and then the number of lobsters harvested from each trap recorded. The logbook was then turned over to The Nature Conservancy.  Alewives were fished in traps until September and October.

Last year’s data shows that the frozen alewives fish comparably well to traditional bait.  Herring bait had slightly better success, but alewives may cost slightly less and therefore, they are essentially equal in profitability.  Good news for conservation efforts and for the lobster fishery!